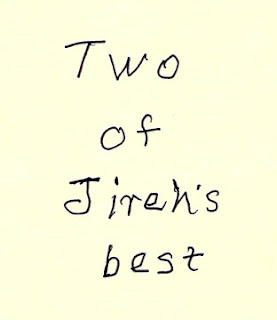 Away back long ago, two boys
One fall when it was cool
In order to become real smart
Went to a Jireh school

They studied Math and Latin too
To fill their heads with knowledge
And all the good stuff that they know
They learned at Jireh College. 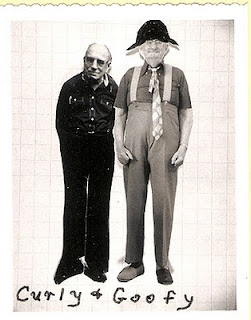 When I came across this entry in Grandad's poems, I vaguely remembered something about Jireh. Well, when I had to make a trip back to Wyoming in early December, I just happened to stop at an historical marker for, you guessed it, Jireh! I took some photos, which should serve as a bit of a history lesson for this entry. 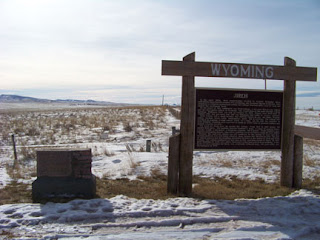 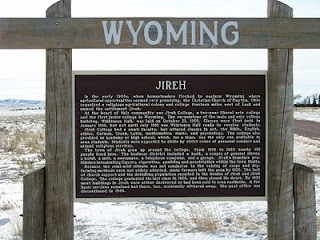 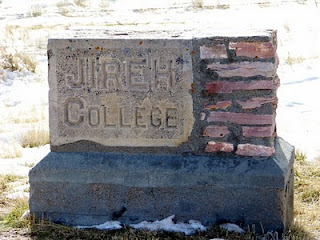 Jehovah Jireh Christian College first opened its doors in 1909. It was established in the middle of nowhere on the dry, windblown eastern Wyoming prairie by a group of Congregational ministers. The school and in time the town of Jireh were located 20 miles from Lusk just south of what is now Wyoming Highway 18/20.

The school consisted of an elementary school, a high school, and a two-year liberal arts and domestic sciences college. For $65 a year, boys and girls got room and board, books, and a Christian education.

The college had an experimental farm where students and area farmers grew sugar beets, wheat, potatoes, alfalfa, and sunflowers.

The town had a newspaper, garage, bank, hardware store, and post office. A battery-operated telephone system was installed using barbed-wire fences, with the telephone wires elevated so the horses and riders could pass underneath.

Eventually the school boasted 65 students and the town 500 residents.

The town was Christian, too. Playing cards, dancing, smoking, and drinking alcohol were forbidden, although rollerskating was allowed.

World War I was the beginning of the end for Jireh, when many of the young people left for the Armed Forces or to support the war effort and never returned. A serious drought and the encroaching Great Depression heralded the end of Jireh and the college. In 1919, the Christian College organization in Ohio that had helped fund the school withdrew its support. Jireh College closed in 1920, and the building was torn down.

A cornerstone is nearly all that remains of the school and the town.

(The above information came from an "Answer Girl" column in the Casper Star Tribune; the major source of the information was Rose Kremers, Stagecoach Museum Curator in Lusk, WY.)
Posted by DKBB at 1:48 PM